The Secret of my Success 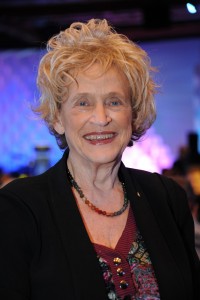 Being a woman leader, Natalie Miller, AO, claims she is an unfortunate rarity in the Australian Film Industry. Commencing her career as a journalist, then as a publicist for the ABC, Miller has achieved numerous accolades over her five decades in the business. Notably becoming the first independent woman distributor in Australia after she co-founded arthouse distribution company Sharmill Films, Miller subsequently founded the renowned arthouse Cinema Nova in Carlton, Melbourne, which she has now been running for over twenty years.

In 2001 she was awarded a Member of the Order of Australian for her contribution to film, which was later enhanced, to an Officer of the Order of Australia. In 2011 came the establishment of The Natalie Miller Fellowship, which continues to address gender equality by supporting and encouraging women, like Miller, who demonstrate entrepreneurship and inspire leadership in the Australian film industry.

For the latest edition to the ‘Secret of my success’ interview series, we speak to the esteemed film distributor and cinema operator about how she turned a hobby into a business by taking full advantage of a string of opportunities that consequently gave her career extraordinary diversity.

Tell us about how you got into the business of film exhibition?
My career was a bit topsy-turvy and one of those things that grew. I took an Arts course at Melbourne University and then thought ‘what do you do with that?’ Luckily I found a position in a public relations firm where I was trained in journalism, which led me to a job at the ABC, working for Channel 2.

After having my first child I decided to freelance and ended up doing the publicity for the Melbourne Film Festival. This exposed me to the amazing films that played at festivals but never played commercially. I then started my distribution company and the first film that I bought was Luis Bunuel’s The Exterminating Angel. I moved on to buying films and that’s what really kick-started my career. I had these great films but I needed somewhere to exhibit them and that’s when I thought having my own theatre would be great.

I ran the Longford Cinema in South Yarra for about 17 years. They were fabulous days, where we had exclusive films like Mona Lisa, My Left Foot and Truly, Madly, Deeply. Then competition came along with the opening of larger cinemas with multiple screens, all within a short radius and it became very difficult operating a single screen. Simultaneously, with my partner Barry Peake, we started the Cinema Nova in Carlton, which was the next step in my journey. We started with two screens and now we have 15.

I still get a lot of pleasure in the Art House side of the business. The business has become so competitive. I’m about to open a film which won the Jury Prize at Cannes and I’ve got another film which I bought at Cannes this year which won the Palme D’or, but does this all add up to box office? I don’t know, it’s a gamble but I keep doing it.

Did you always want to get into the film industry?
I think it was more a hobby when I was young. My parents had first night seats at the Palace Theatre in St Kilda and I used to go with them on Saturday nights and in those days you booked seats. I used to love going to the MGM musicals in the school holidays and I had a crush on Peter Lawford! I was interested as a consumer and didn’t think about it as a business during that time. Then there was the position to do publicity for the Melbourne Film Festival, which led me into the film world so I guess there was opportunity along the way.

What’s the best advice someone has ever given you?
Probably my late father, which was a very long time ago. He used to say ‘Never be greedy of another man’s profit.’ Now they’re just a few words but I think that they’re very salient. If you’re in business it’s important not to over exceed yourself or not to worry about the person next to you. I think it’s very wise advice.

Do you think being versatile is important to succeed in life?
You can’t sit still and I think that new challenges are always exciting so if that’s what versatile means I guess, yes it is important.

Is having a dream important too?
My career really grew from one thing leading to another. You achieve things that you would never have dreamt of – like being awarded an Australian Order. I guess I was proud but you don’t do it for that, however getting the recognition is very nice. So if we’re talking about dreaming, you dream of the next step all the time. I dream that my family will be very well – I’m very family conscious too.

Was it difficult juggling family with work commitments?
Not really because I think it’s a matter of prioritising. I never miss the final {film} market but I’m missing it this year because I’m going home for a family birthday – that’s just a priority. So it’s about priorities and you can’t do two things at once so you have to choose.

Do you have any regrets at all – anything you wanted to achieve that you didn’t?
Once I started running my business my focus became the direction of that business and I’ve missed some films that I wanted to buy that I have regrets about that I didn’t go that extra mile to buy them. Then someone said to me ‘you can’t lose money on something you didn’t buy!’ (laughs)

What advice would you give to someone trying to get into your profession?
I think it’ll be much harder to do what I’ve achieved because the opportunities aren’t there to open cinema sites and the films are becoming so much more expensive and it’s so much more competitive too. So all I want to say is if you really want to do it just do it and get yourself mentored by somebody who can help you along the way.

Now we have the Natalie Miller Fellowship where we’re looking at women’s leadership.

What do you think can be improved about gender diversity in the industry?
Well I think the conversation needs to happen to make men conscious of women to be in leadership roles. There were six blokes sitting up on the stage at the Movie Convention yesterday, (referring to a talking heads event regarding the future of cinema, featuring a panel of industry experts) we need some women heads and the Natalie Miller Fellowship is about giving women the confidence to think they can do it.

For more on the Natalie Miller Fellowship head here: http://nataliemillerfellowship.com